It sounds a very specific title for a post, which is true, but I think it highlights an important issue with what we allow our children to access online.  Take for example my son and his friends, who are all football mad supporting a variety of teams across the country.    All fairly sensible children with one or two exceptions as is the case with most groups of young people. 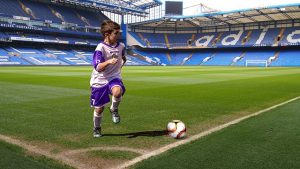 Now we have a fairly relaxed policy with regards social interaction online for my children, but one with certain guidelines.  One of those is no full names, addresses and of course sharing of photos/videos of themselves.  I also ensure that any place they do use to interact that they clear with me too.  The idea is that I can look to see the sort of interaction that is taking place and assess if there is a potential problem.

Unfortunately, the issue is that it’s almost impossible to assess whether a particular site or forum is safe.  For example, many football forums are obviously full of older people and discussions have that normal grown up feel to them.  Yet not surprisingly the kids tend to avoid these and create their own environments full of younger children.

It’s not hard to do, there are loads of sites where you can create a free forum in a few minutes and allow people to join.   They are similar to Facebook groups where there is an administration component but that does rely on the individual taking that role.  I know of both Facebook groups and very large football forums being run and administrated by children no older than 13 years old.  Some are completely safe with many just discussing the latest results and what was on Match of the Day online that evening – link for accessing MoTD online.

Whats particularly a problem with football forums is that there are genuine and realistic reasons for meeting up which can be used by predatory adults.  In many of the forums I use based on following football teams there are threads and areas where you can arrange to meet up in the evening, before matches or even advertise for lifts and company for attending away matches.  All of which is fine for adults who can be careful but can be very dangerous for children to use.

This is the problem with any of these sites, it’s almost impossible to filter out who’s who simply from what it posted. It’s well documented the lengths that pedophiles go to in order to assimilate the language and behaviour of young people.  Also even if you could identify potential problems from public posts, you would still have no access to any associated private messaging and communication methods.

Ultimately your children’s safety online comes down to education more than anything.  Social interaction online is part of growing up now so it’s impossible to stop properly.  Any children who do get blocked completely will only be disadvantaged when they get older when such communication methods are inevitable.  However we can teach our children to be careful and responsible online and follow basic common sense rules.